How To Make A Lava Lamp + Video

You know the mesmerizing feel of watching a lava lamp, with its large colored bubbles sinking, rising, and morphing?

The action you see is actually a fun science experiment as it's caused by the density and polarity of the substances.

With this project, you can make your own (temporary) DIY lava lamp with household materials! It's easy and safe, and it looks very cool.

A lava lamp works because of two different scientific principles: density, and polarity.

(The scientific equation is density = mass/volume.)

If you measure an equal volume of oil and water, you'll find that the water is heavier than the same amount of oil. This is because water molecules are packed more tightly; a cup of water actually has more mass than a cup of oil.

Because water is denser than oil, it will sink to the bottom when the two are put in the same container. Density is affected by temperature—the hotter a liquid is, the less dense it will be.

Water molecules are "polar" because they have a lopsided electrical charge that attracts other atoms. The end of the molecule with the two hydrogen atoms is positively charged. The other end, with the oxygen, is negatively charged.

Just like in a magnet, where north poles are attracted to south poles ("opposites attract"), the positive end of the water molecule will connect with the negative end of other molecules.

Oil molecules, however, are non-polar— they don't have a positive or negative charge, so they are not attracted to the water molecules at all. This is why oil and water don't mix!

Real lava lamps use a polar and non-polar liquid just like our homemade one did. In a real one, however, the densities of the liquids are much closer together than vegetable oil and water.

The denser liquid sinks to the bottom, but the lava lamp light heats it up until it expands and becomes less dense, causing it to rise upward. As it gets farther from the light, it cools down, becoming denser again until it sinks; then the cycle starts all over.

Instead of using a light, in our homemade lava lamp, we used Alka-seltzer to power the lamp.

The Alka-seltzer reacts with the water to produce carbon dioxide gas bubbles. These stick to the water droplets. The water/gas combo is less dense than the oil, so they rise to the top of the flask.

At the top, the gas bubbles pop and escape into the air, allowing the dense water to sink back to the bottom again.

Lava lamps powered by heat are trickier to make and can use more hazardous materials. You can experiment fairly safely with things like rubbing alcohol and mineral oil or lamp oil. See if you can make a lamp powered by heat! 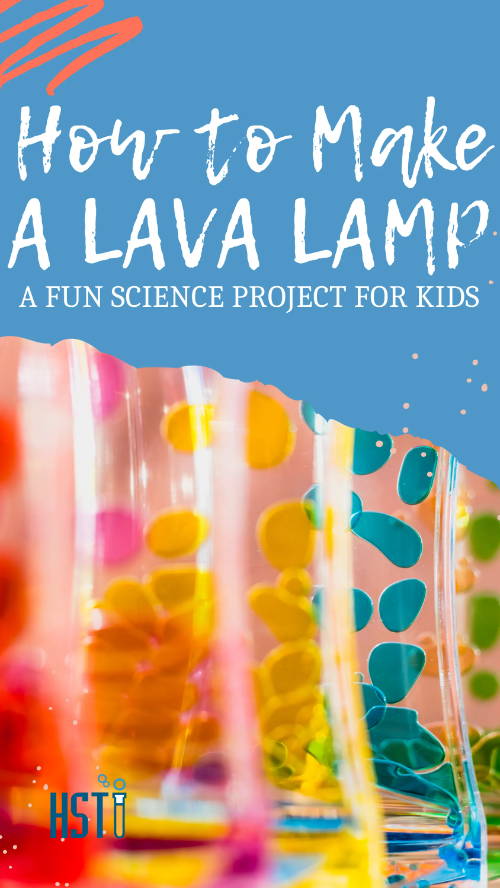 Using knowledge of liquid density, you can easily "stack" several liquids on top of each other! Use food coloring to make a rainbow of colors.

Each of the liquids you used had a different density. You added them to the cylinder in order of most dense (honey) to least dense (rubbing alcohol).

Since each new liquid was less dense than the one before it, it floated on top instead of mixing together. You can try other liquids if you want to!

To figure out where your new liquid would fit in the column, you can measure the density of all the liquids. Measure an exactly equal volume of each liquid and weigh it (be sure to subtract the weight of the container). Even though the amount of liquid is the same, the denser ones will be heavier.

There are many different factors that affect density, such as temperature. Heat causes substances to expand and become less dense, while cold causes them to contract and become denser.

(One exception is water - it becomes denser with cold until the freezing point, but it freezes in a crystalline structure that makes ice less dense than liquid water.)

Adding things to a liquid will also change its density. For example, saltwater is denser than regular water (which is why it's easier to float in saltwater than in freshwater!).

The Dead Sea contains the saltiest water on earth, which is also the densest water found naturally on earth!

You don't need flotation devices if you are swimming in the Dead Sea. Your body's density is already much less than the water's, so the only thing you can do is float higher than you ever would in freshwater!

Most liquids contract when they freeze, making them denser in their solid form than in their liquid form.

(They have the same mass, but it's packed into a smaller volume.)

Water does the opposite: it expands as it freezes, lowering the density. Since ice is less dense than water, it floats. And it's a good thing it does! If water acted like most other liquids, lakes and rivers would freeze solid and all life in them would die.

Instead, a layer of ice forms on the surface, leaving liquid water underneath.