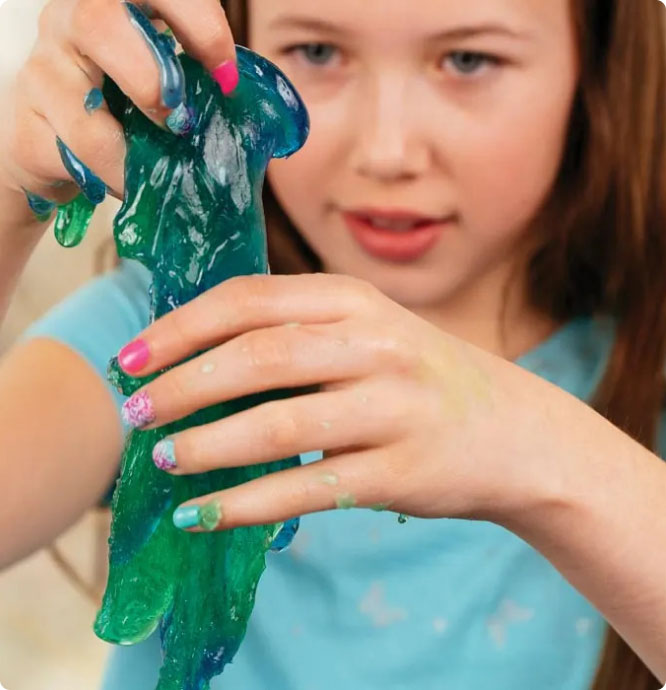 How to Make Slime

Did you know you can make your own slime or “goop” for a fun learning and play activity? Non-Newtonian liquids are fascinating for all ages and provide a great learning opportunity about chemistry. 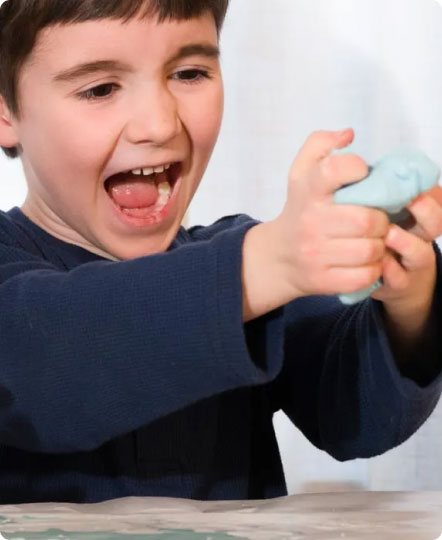 This version of slime (also called Gak and Glue Slime) shows you how to make slime with glue and Borax. This is a fast and easy slime recipe!

What You Need to Make Simple Easy Slime Recipe

How to Make Simple Slime

What Happened to the Simple Slime?

The glue has an ingredient called polyvinyl acetate, which is a liquid polymer. The borax links the polyvinyl acetate molecules to each other, creating one large, flexible polymer. This kind of slime will get stiffer and more like putty the more you play with it. Experiment with different glues to see if they create slime (e.g., carpenter glue, tacky glue, etc.) 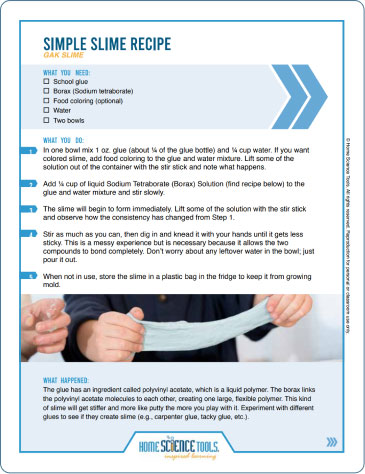 The second type of slime is the same clear gooey kind that you see in the movies. This is the real gooey deal! (This slime is non-toxic, but still, keep these slime ingredients away from unsupervised children and wash your hands after playing with the slime.)

What You Need to Make Super Slime

How to Make Super Slime

What Happened to the Super Slime? 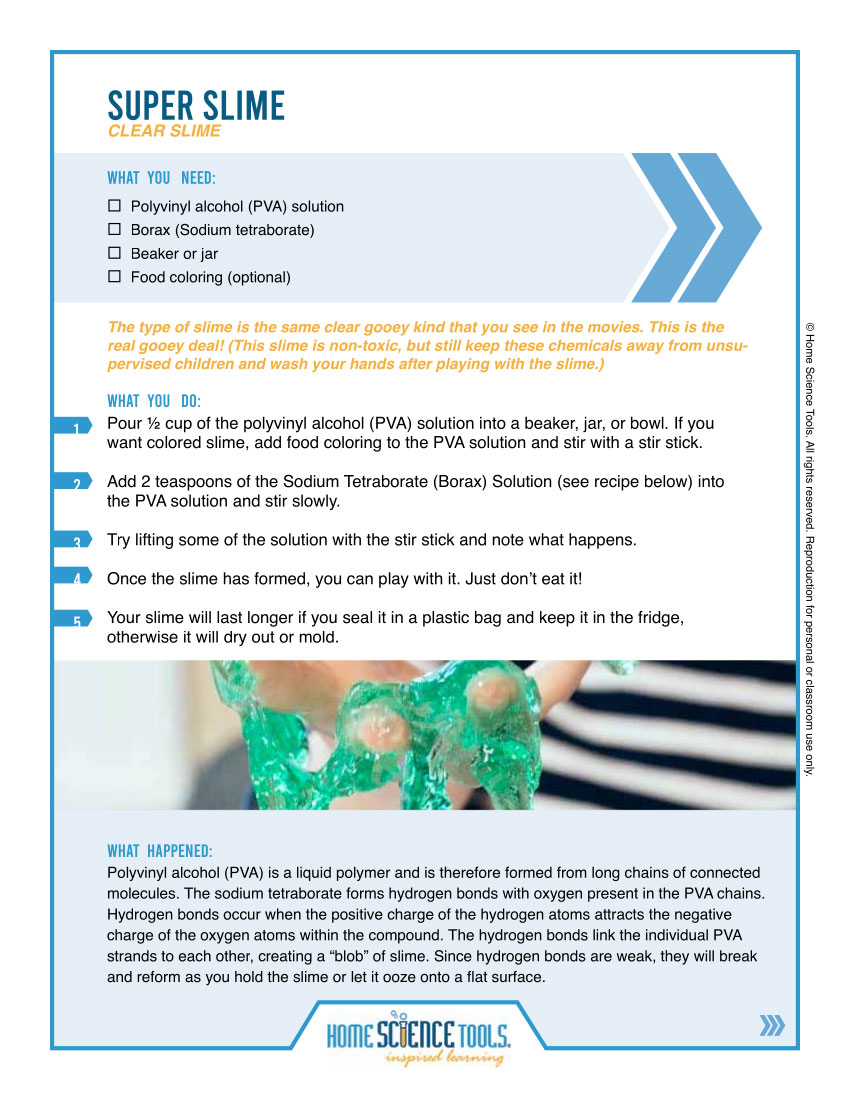 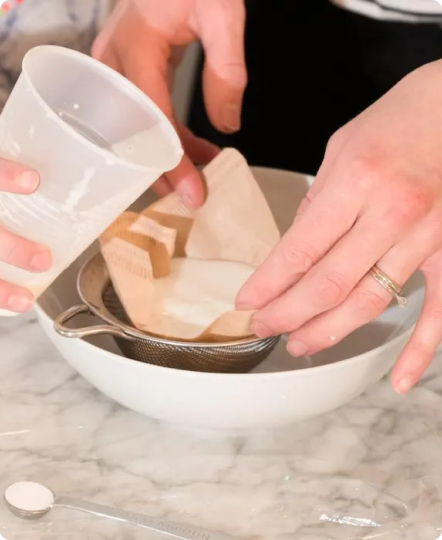 If you're wondering how to make slime without borax, this Glooze slime recipe is an excellent option. This slimy substance is made from skim milk, vinegar & baking soda!

What You Need to Make Glooze Slime

How to Make Glooze Slime

What Happened to the Glooze Slime?

When you added the vinegar to the milk, it caused the milk’s protein, casein, which is also a polymer, to separate from the liquid part of the milk and clump together to form solids. Casein is used in adhesives, paints, and even plastics. The baking soda neutralizes the acid added, which allows the casein to go back to its liquid form. 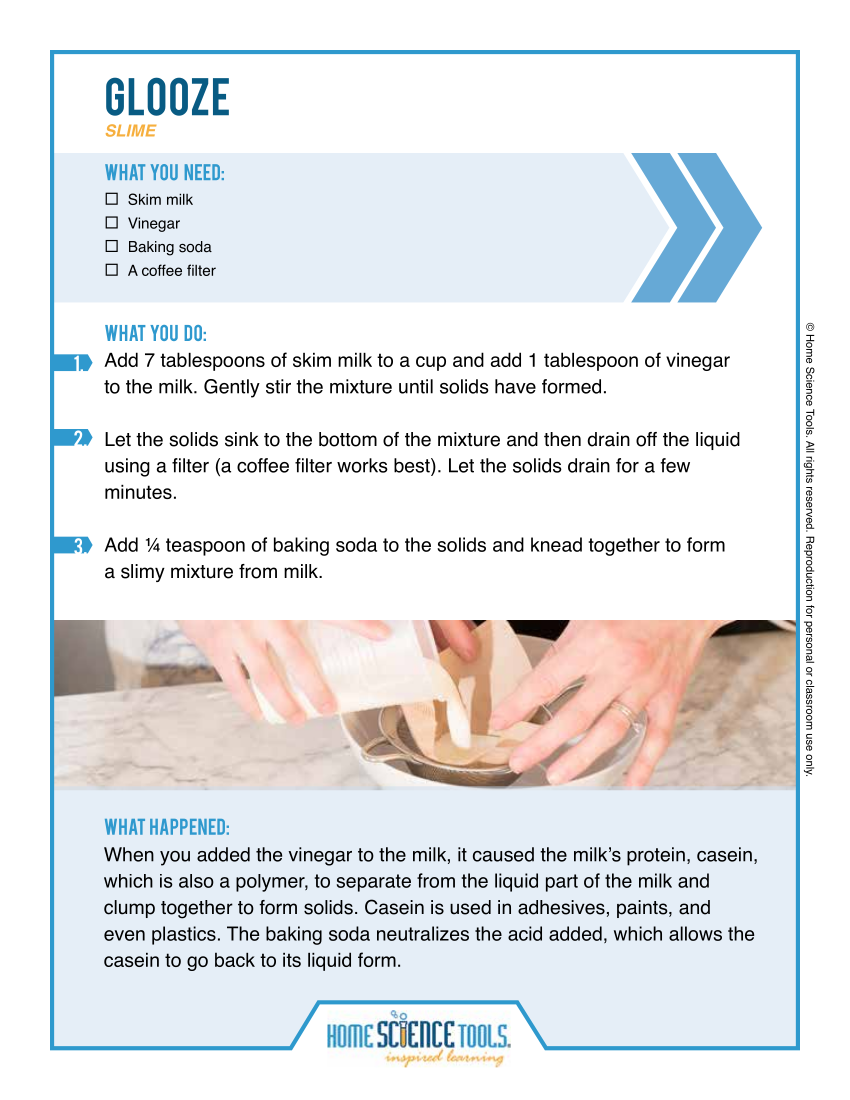 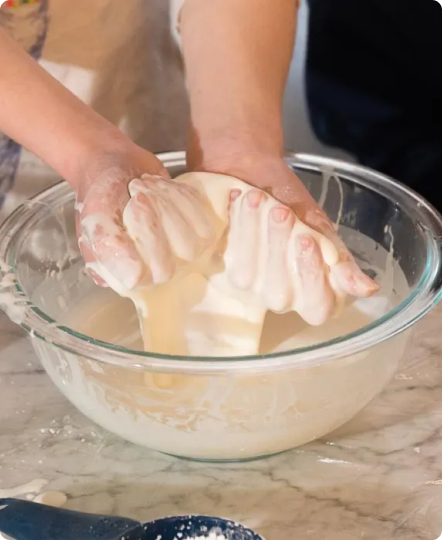 This is another slime recipe without borax or glue. Make a non-Newtonian fluid that resembles quicksand using cornstarch.

What You Need to Make Oobleck

How to Make Oobleck Slime

What Happened to the Oobleck?

The flow and movement of fluid are affected by its viscosity, or how sticky and thick it is. Quicksand and the cornstarch-water mixture are both non-Newtonian fluids. Non-Newtonian viscosity changes with the type of force applied to it. The viscosity of Newtonian fluids (such as water and honey, which follow Sir Isaac Newton’s law of viscosity) is dependent only on the temperature and pressure of the fluid, not the force applied to it. For instance, warm honey (less viscous) flows much more freely than cold honey (more viscous).

Since the ability of a non-Newtonian fluid to move depends on the force or stress applied to it, these fluids do not act like ones we are more familiar with (e.g., honey or water). A light pressure, such as pouring or gently pressing the cornstarch-water mixture, allows it to move like a liquid. 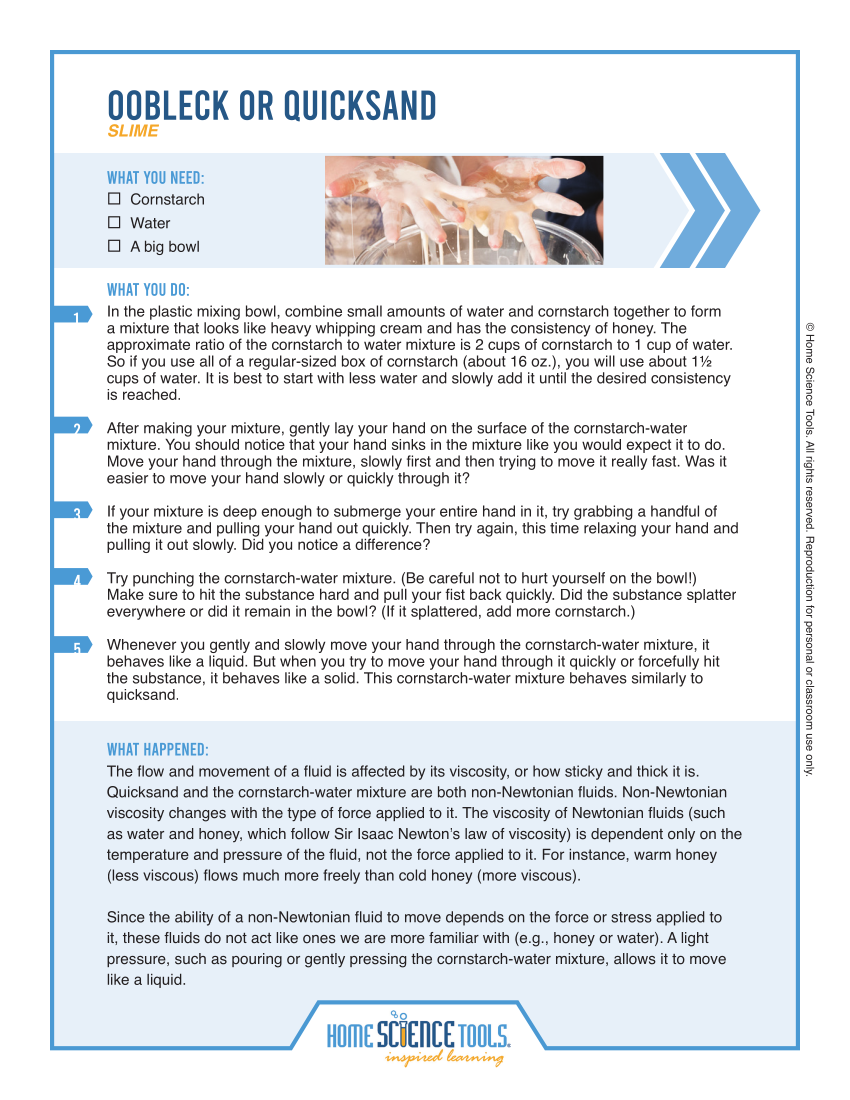 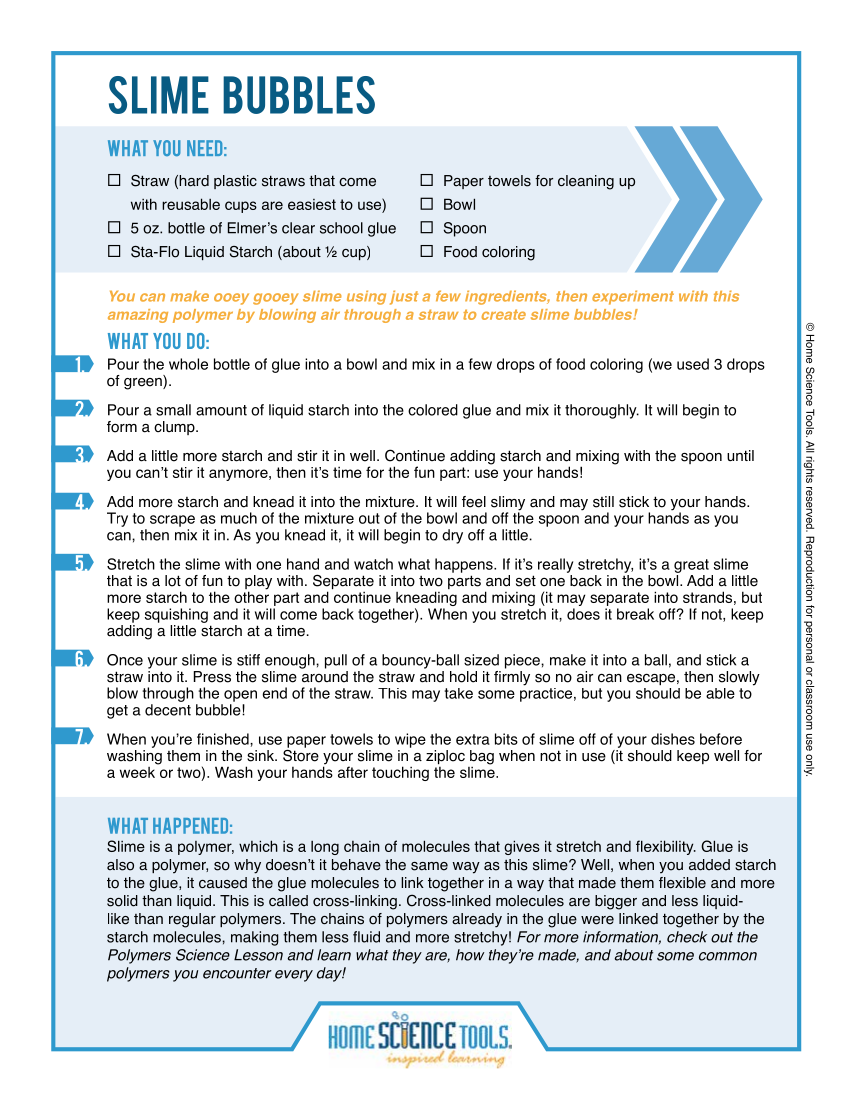 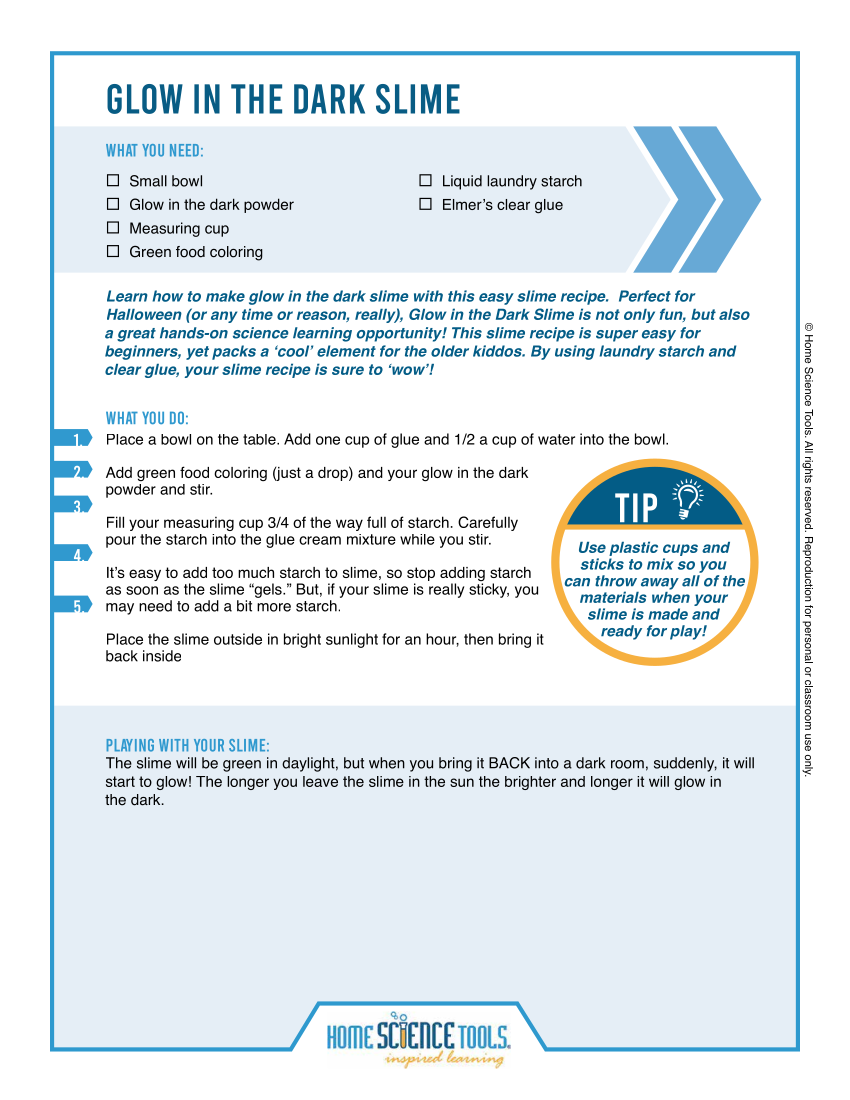 Glow in the Dark Slime

Explore more of our most popular science projects! 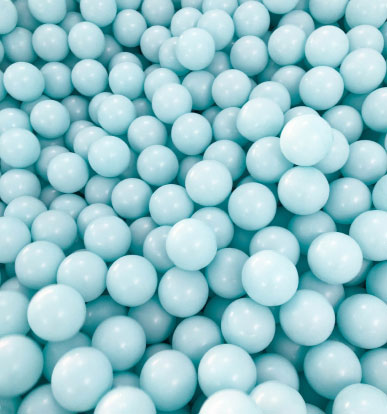 How to Make a Bouncy Ball 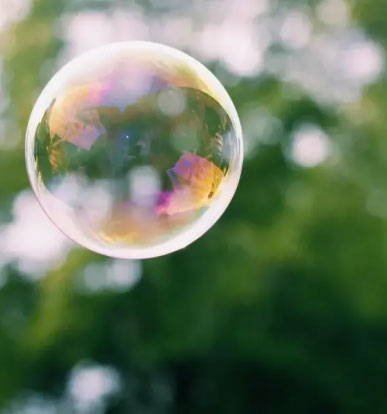 How to Make Bubbles