How To Make a Hot Air Balloon

Learn about air density as you make a simple hot air balloon in this easy science project. In its simplest construction, a hot air balloon is comprised of an envelope (the balloon part), a basket, and a fuel source.

We'll show you how to construct an envelope from a super-lightweight trash can liner and fuel your balloon with birthday candles.

*If using a dry cleaner's bag, you'll need to seal the hole at the top that the hanger goes through.

Make sure there are no flammable liquids nearby. Keep a fire extinguisher or smothering method within reach at all times. 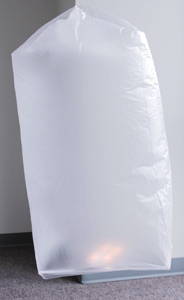 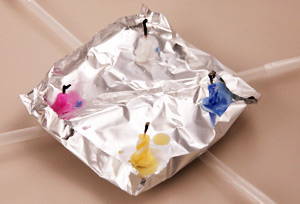 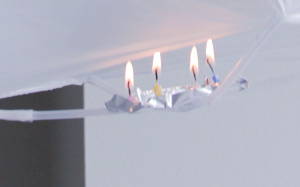 One of the important properties of gas is that it expands when it gets hot and contracts when it cools. This means that when you heat a gas, its individual molecules vibrate faster and spread further apart from each other.

As a result, the gas also gets lighter as it gets hotter, since the molecules are less concentrated.

The expanding property of gas is what enables hot air balloons to inflate and fly. Hot air going into the balloon has a less dense concentration of molecules, making the inflated balloon lighter than the cooler, denser air surrounding it.

That denser outer air buoys up the balloon and allows it to float.

Conversely, the affect of cooling air will bring the balloon back down—the air molecules inside the balloon move closer together when cooled, making the air in the balloon no longer lighter than the surrounding air. It's why a cold, damp cloud or fog can be dangerous for a hot air balloon pilot.

Although air might seem weightless, it's actually formed by gases and has mass like any other matter. Usually air is made up of 78% nitrogen, 21% oxygen, and 1% carbon dioxide and noble gases. The density of air is about 0.075 pounds (or approximately 34 grams—a little more than an ounce) per cubic foot at 70 °F and one atmosphere of pressure.

That's why using lightweight materials was so vital in building this hot air balloon. The weight of the balloon and the air inside it has to be less than the weight of the displaced ambient air in order for it to fly.