Egg in a Bottle Experiment + Video

You can conduct science experiments anywhere, but how about your kitchen? Learn about the relationship between temperature and pressure as you watch an egg get sucked into the top of a bottle. A fun bottle trick that will amaze all ages!

Egg in a Bottle Experiment

WHAT YOU NEED FOR AN EGG IN A BOTTLE EXPERIMENT

How to Do the Egg in a Bottle Experiment

Use a paper towel to coat the inside edge of the bottle mouth with a little bit of vegetable oil for lubrication.

Have an adult light a match to light the end of a strip of paper on fire.

Lift the egg off of the bottle, drop the paper inside with the flame down, and quickly replace the egg. Watch the egg wiggle a little in the bottle mouth, and then get sucked inside as the bottle cools!

How to Get an Egg in a Bottle

First, the science behind a hard-boiled egg: Egg whites are made of water and proteins.

Proteins are made of long chains of amino acids, but in an egg, the chains are clumped tightly together in individual spheres.

(These are called "globular proteins.")

When the egg is heated, the proteins and water molecules begin to move faster. As they move and collide with each other, the individual protein chains start to "unravel," eventually bonding loosely with other protein chains, forming a network of proteins with water trapped inside.

The consistency has changed from runny egg white to a soft solid!

So how does this squishy-but-solid egg get mysteriously pushed inside the bottle?

When you dropped the burning paper through the neck of the bottle, it caused the air inside to heat up and expand rapidly. That expanding air pushed the egg aside and escaped from the bottle; that's why you saw the egg vibrating.

(The egg acted as a seal to prevent outside air from getting in to fill the extra space.)

How do you get the egg out again?

The pressure inside the bottle has to be higher than that outside of the bottle. To increase the pressure, turn the bottle upside down and tilt it until the small end of the egg is sitting in the mouth. 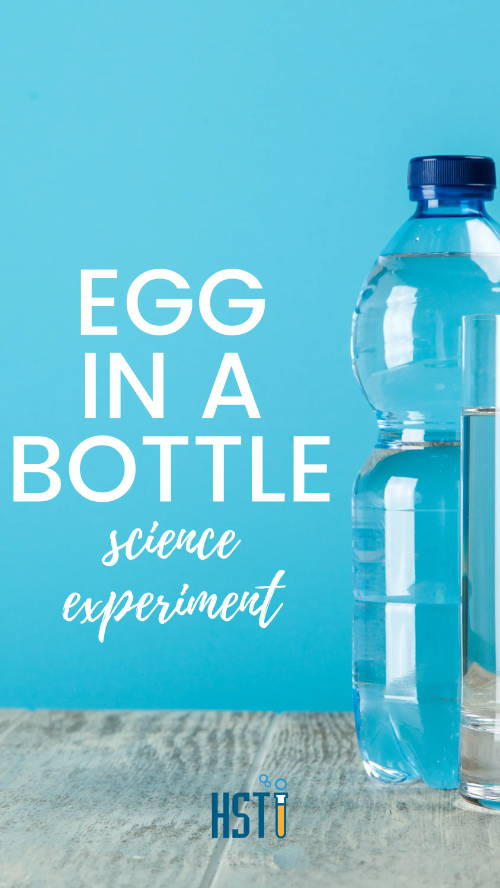